30 years ago central Europe stood up for freedom, for liberty, for eachother when they chose to rally as a people against the oppressive communist rule of the 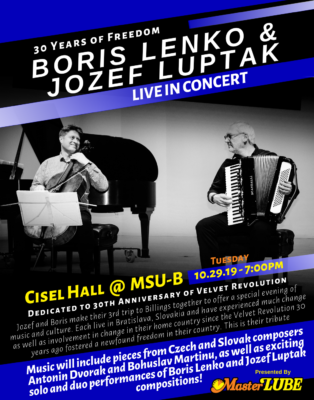 Soviet Union over the area. In Czecho-Slovakia, later seperated into two seperate free states in 1993, that was sparked by students and the arts community peacefully protesting in the streets of prominent cities such as Prague and Bratislava by the hundreds of thousands. This week Billings is blessed to welcome 3 good friends from Bratislava, Slovakia, to share their experience living under communism, peacefully transition to a free market democracy, as well as their love of music, culture, and conversation with friends. Those three gentlemen are Milan Cicel, Jozef Luptak, and Boris Lenko. Help us to welcome them with these 3 events:

Introduction To Slovakia Lecture Series – Jozef Luptak –  The Velvet Revolution; Before, Involvement During, and Since with guest Milan Cicel

Concert will include pieces from Czech and Slovak composers Antonin Dvorak and Bohuslav Martinu, as well as duo performances of their own compositions.. The have properly dubbed this recital:

About the special guests:

Milan Cicel is a long time friend and integral in developing the relationships between Billings and Bratislava. 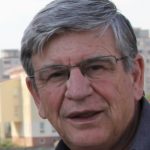 With an incredible story of youth and young manhood under communist rule and the threats it posed if you were a free thinking spirit such as he was, he faced threats to life at a young age and lost prominent positions in his field of computer science due to deeply held beliefs that rooted in him, passed down from his father. He would go on to be a prominent figure in founding churches, C.S. Lewis Bilingual High School, and several other enterprises in Slovakia that seek to operate based on Christian values. The free lectures and concert are presented by MasterLube in partnership with Rocky Mountain College and Montana State University Billings. For additional information, contact Zane at zanel@masterlube.com.