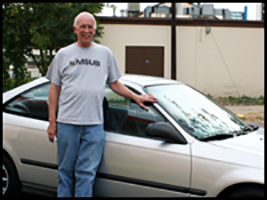 Kim Koenig from Fromberg starts his day out with a drive in his 1998 Honda Civic HX. As a school counselor at Huntley Project High School, he needs to get started on his morning commute earlier than most folks. His journey is 120 miles round trip. And after taking this adventure each weekday for the last 14 years in, he’s managed to rack up an astounding 500,000 miles on his treasured silver coupe. Sure he takes a road trip a few times a year, but most of the miles added up from the daily commute. And after that many miles, you can bet he has some driving stories to tell.

Kim has seen his fair share of critters in the road – some of which unfortunately had a rough encounter with his bumper, and countless rocks and road debris. “I think I’ve gone though at least eight windshields,” he explained. Most of the windshield damage comes from driving on the highway after trucks sand the roadway during harsh winter weather. And any Montanan knows that deer are a common roadside hazard. “I took major damage from hitting a deer once,” says Kim, “it took out the two quarter panels, hood, fluid containers and the windshield. $2,200 in damages. But it was worth it to get it fixed.” He says the car averages 40 mpg. “That’s why I don’t want to give it up!”

While animals and bad weather are a common risk in our state, one of his most interesting tales from the road involved material not even of this planet. “This is going to sound really strange,” he laughs, “but my car was actually once hit by meteorite debris.” About 5-6 years ago during a routine commute home from work, Kim was driving about 3 miles south of Laurel on an empty highway 212 – no cars in front, behind or passing him. Suddenly and without warning, his windshield shattered. Confused and covered in glass, he stopped at a nearby house to ask for help and to call his friend to inform her that he wouldn’t make it to their scheduled meeting. His friend told him that there had been a meteor shower over Billings and that that may have been what caused the accident. Kim’s insurance investigator confirmed that whatever struck his car had come straight down from the sky. Media coverage followed when a local TV station interviewed Kim and did a story on the incident.

So what’s the secret behind getting a car to run for 500,000 miles? Kim says it’s regular maintenance. “I have the oil changed every 3,000 or so miles,” he says, “change brake pads, filters and that sort of thing as needed.” He goes through tires about once every two years. At mile 487,000, Kim had to have a valve job done on the car and will need to have rings done soon. Other than that, the transmission, suspension and other elements of the coupe have never needed work. “It runs really smooth,” he says. As can be expected, Kim has no plans to part with his ride in the near future. “Eventually I would like to buy a new Honda Civic and use it just for weekends and trips but keep driving my old one back and forth to work.” When asked if he’ll just keep driving it til the wheels fall off, he laughs and says “yes, of course… then I’ll put some new wheels on it!”