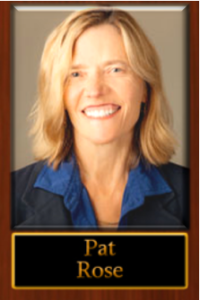 Pat Rose is what you might call a Cinderella story. But instead of a fairy Godmother waving a magic wand, her story features oil technicians waving dipsticks. And rather than being rescued by Prince Charming, Pat rescued herself.

When Pat came to work at Masterlube in January of 1985, it was mainly desperation that drove her there. “I was 26 years old, jobless, living on unemployment and I wasn’t sure how I was going to make my next house payment,” Pat reflected. “I took a risk and asked for a job.”

Little did she know, but she was embarking on her happily ever after. Two weeks following her inquiry, Masterlube’s owner Bill Simmons hired her.

A League of Her Own
Like all women working at lube shops in those days, Pat was a cashier. She greeted customers, handled money and vacuumed car interiors. After a time, she was cross trained to check fluids under the hood too.

The job was agreeable and Pat was climbing out of her financial slump, but she had set her hopes even higher…or lower, depending on your perspective. “I wanted the job that paid the most and that was the one under the car in what we called the pit,” Pat said. While she suspects may have Bill felt apprehensive about letting her go under, eventually that’s what happened. Pat made history as Masterlube’s first woman to work in the pit, the first of many unlikely accomplishments.

What Lies Beneath
“Bill Simmons is the kind of guy who brings out the best in people,” Pat mused. “He sees potential and helps people find it.”

Pat emphasized that she wasn’t a special case in Bill’s eyes. He did take a personal interest in her goals and success and did all he could to support her path, but she wasn’t the only one he favored. “He was a mentor and role model,” Pat said. “It wasn’t just me; he was like that with everybody.”

Support System
Simmons possessed a rare gift that many employers strive to develop but few ever do: he knew how to motivate his staff to be their best. He figured out that if he supported his staff as they pursued their dreams, in turn they’d support Masterlube by being the best employees you could want. “Bill did the opposite of other employers,” Pat said. “Rather than keeping good employees for himself, Bill encouraged people to go onto bigger and better things.”

For Pat, those things included going to college, earning a bachelor’s degree followed by a master’s, and eventually a doctorate as well. “While I think I would have found my direction eventually, Bill’s influence was huge in my life,” Pat said. “As we go through life, there are people who guide us—mentors—people who believe in us. And that’s everything.”

Self Service
Today Pat owns a private psychology practice in Arizona. She recently married and believes she’s fulfilling her life’s purpose through her practice. Still, she fondly recalls her days at Masterlube as some of the best of her life. “Of any job I’ve ever had in my life, that’s the one I loved the most,” Pat said.

She remembers surprising Masterlube’s customers with an unmatched level of service. Oil changes became a respite from the normal hustle and bustle, a welcome break from an otherwise hectic day. Indeed, superior treatment is what propelled Masterlube into the forefront of the industry.

“The looks on the customers’ faces was priceless,” Pat said. “I’m so grateful to have been a part of it.”

“Life is what you make of it.”