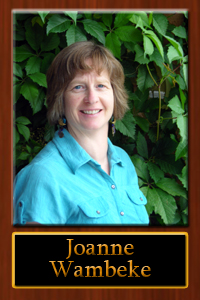 Joanne Wambeke has her fair share of job titles: Psychotherapist, Hypnotherapist, Jin Shin Jyutsu Practitioner and Director of Student Affairs. But back in 1980, she had one – Cashier for at a local quick lube shop.

Wambeke started working at Minit Lube in 1980, cashiering, vacuuming cars and washing windows until 1986. Minit Lube became MasterLube in 1981 and although it wasn’t her dream job, she enjoyed her work and felt that she easily fit into the light-hearted environment. “I remember there being a lot of humor,” she said, “I do remember having some philosophical conversations with the guys who worked there (and) I think these conversations allowed us to feel comfortable joking around.” Of course, Bill Simmons, chairman of MasterLube and new to the company in 1981, remembers things a little differently. “If there was humor on the staff, I can tell you where it came from!” he joked, “I remember Joanne as being very quiet, but when she did say something, it was drop-dead funny!” Wambeke started working at a very early age, after school, on weekends, and during the summer. However, as Simmons describes her, age was no factor against her enthusiasm and strong work ethic. “She was young, but she was tough – no one gave her guff or took advantage of her,” he said.

Wambeke soon went off to college and continued to work summers at MasterLube. When she graduated from Carroll College in Helena, MT in 1987 with a bachelor’s degree in business and psychology, the staff of the small lube shop could not be prouder. She became the first person to have her photo on the MasterLube “alumni wall” – a visual reminder to present employees of fellow cashiers, lubers, and hoodmen who have gone on to achieve their dreams.

However, the transition from school to work in the professional world wasn’t easy at first. “I knew how to study and get good grades, but I didn’t know how to translate that into a professional job,” she explained. She felt uncomfortable in an office, since she had never been exposed to that type of environment before. But that didn’t stop her; Wambeke moved to the Washington, D.C. area shortly after graduation and lived with her sister while seeking employment.

D.C. proved to be very different from Montana. “Everyone had a “white collar” job,” she said. Wambeke started working temporary jobs and soon learned how to handle an office environment. She accepted a permanent position with a human resources consulting firm and eventually learned how to apply her college degree towards a list of job duties. “Once I had an idea of what was expected, I was able to translate my academic knowledge and skills to these new tasks,” she explained.

While working at the consulting firm, Wambeke came to the self-realization that she greatly desired to backpack though Europe. She spent the next six months working three jobs – her office position, catering at a hotel and officiating softball games, in order to save enough money for a student Eurail pass plus spending money for three months in Europe. “I traveled from mid-September to early December 1990, starting in Berlin, winding through Europe, over to Greece, back to Paris, then Ireland and England. I had a great time and learned much about myself and humanity.”

After returning stateside, Wambeke asked herself again, “What do I really want to do?” The question landed her back in school pursuing a master’s degree in counseling at the University of Virginia. After graduating in 1995, she moved to Santa Fe, NM to work at the Santa Fe Community College as a counselor for academic advising, career and personal counseling. She has worked in areas higher education counseling ever since and currently is the Director of Student Affairs for the International College at Beijing through the University of Colorado Denver.

But professional success aside, life is about a lot more than work. She explains her personal goal as “to first be at peace with myself… and to help others find peace for themselves.” This goal prompted her to open a private psychotherapy, hypnotherapy and counseling practice called Colorado Healing Services in 2005. She specialized in Jin Shin Jyutsu® Physio-Philosophy, career counseling, qigong, and teaches laughter yoga among her services and strives to help her clients achieve their personal goals and discover their individual potential. “We are each a microcosm of our own world,” she explains, “what you see on the outside is merely a reflection of what is going on inside you. Through hypnosis and the other areas I study, I myself get to see the “aha’s” of how this works and to help others see it as well.”

And right now, Joanne says she is at peace. She lives in Denver and enjoys gardening and being outdoors in her spare time; hiking, show shoeing, cross-country skiing and being with friends. She encourages others to find their peace and to understand that success can be measured in many ways. Her advice is like many other professionals, philosophers and great minds of our time, but her story is uniquely her own.

“It matters less what you do than how you do it… have high integrity and to thine own self be true.”