Description: Drive belts are made of reinforced, high-tensile strength cords and synthetic rubber. They connect the engine to front-mounted accessories. Belts come in two different types: The traditional V-belt (cross-section of belt has a V-shape) and the serpentine belt (also called Poly-V, Poly-Rib, Multi-Rib, and Micro-V belt), which uses multiple Vs for more positive contact with its mating pulleys. 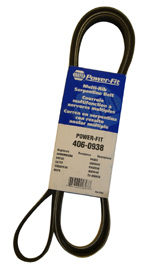 Maintenance Tips/Suggestions: Studies show that the chances of a drive belt failure rises dramatically after four years or 36,000 miles for V-belts, 50,000 miles for serpentine belts. This doesn’t mean that the belts shouldn’t be inspected before then, though. The belts should be checked every time the oil is changed to make sure they’re OK and properly tightened. When checking V-belts, a slipping belt usually has shiny sidewalls (glazing) caused by heat from sliding in the pulleys. The glazing often causes a chattering, slapping or squealing noise. And, because the glazing hardens the belt, it’s prone to cracking and early failure. Belt slippage often occurs because of low tension, the wrong belt, or grease or oil. Missing chunks or separating layers of the belt often hint at a dousing of oil or grease. The source of the oil or grease needs to be corrected before installing a new belt. A V-belt with any of these conditions should be replaced as soon as possible. On serpentine belts, inspect the belt closely for any cracks in the ribbed area. Also check the backside of the belt for grooves, fraying, or splitting. Although random cracks across the ribs are a sign of normal belt wear and don’t mean the belt will fail immediately, it’s a good idea to replace the belt the next time your car is serviced. If you find 10 cracks per inch or more you should replace the belt as soon as possible.

AVAILABLE  AT  THESE  LOCATIONS