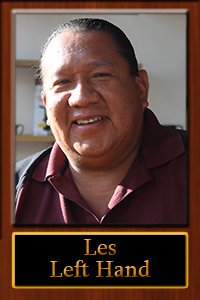 When Les Left Hand enters a room, people notice. A towering presence at 6’ 5,” he carries broad shoulders and a luminescent image of confidence that would make one think that he isn’t the type of man to “tangle” with. But in truth, he is the epitome of the expression “gentle giant.” He looks younger than 50, but his mature demeanor becomes quickly apparent.

Soft-spoken, with a gentle smile and deep, penetrating brown eyes, with black hair pulled back into a long braid, Left Hand says his priority in life is to teach and help others, especially children. He says, “When I was younger, I had a vision quest in which I was surrounded by young children and traditional Sun Dances.” He explained that “a vision quest is a rite of passage for a person to find their heart and guidance when they are not sure what to do.” He says that in his heart he always knew he wanted to be a teacher. “My mom was a Head Start teacher and my relatives were in education—teachers, principals and superintendents in schools.”

After high school, he fought forest fires in Yellowstone Park, cooked in several restaurants, and attended several colleges, earning credits here and there. Determined to graduate from college, he eventually earned a Bachelor of Science degree in Applied Management from Rocky Mountain College in Billings.

However, his younger life journey could have taken him on a different path. Les says he abused alcohol when he was young, as did many family members and friends. He witnessed the devastating effects of alcohol and drug abuse in his community on the Crow reservation and ultimately decided to change his ways. [The alcoholism rate on reservations is six times that of the national non-reservation average.]

He credits MasterLube and owner, Bill Simmons, with “changing my life–the direction he and MasterLube gave me.” Simmons treated Les with respect and believed in him. One of Les’s goals was to eventually own his own business. He says, “Bill Simmons helped me with that. He looks at a person and sees them for who he or she is–and helps that person to build a foundation for life.”

Les began at an entry level position at MasterLube — then was promoted to the position of “closer,” and then to an assistant and, ultimately, he was promoted to managing three MasterLube stores in Billings. He relishes those memories and said, “It was fun and inspiring to work with people who may have been down and out and to give them second chances.” A lot like what his mentor, Bill Simmons, did for him.

After working at MasterLube for 25 years, Les wanted to return to college but he says, “Fate stepped in.” After noticing the high employee turnover rate at a care facility in Crow Agency, he became the administrator of training there for two years. When asked why he did this instead of following his dream of furthering his education, Les, a man of deep humility, gave it some thought and explained, “Most of our elders have passed on. I wanted to make a connection with our elders, who had taught us our customs and the traditions that we have.” It was one way he could honor his elders and give back. He says, “I am always trying to help people better their lives.”

Traditions are important to Les. He is concerned that some of the younger generations on the reservation are losing those cherished traditions. He says, “Today the younger generation’s first language is English.” In order to preserve the Crow’s rich cultural heritage, Left Hand says, “We are teaching young families the Crow language through immersion classes on the Crow Reservation, Lame Deer, and Pryor.”

After two years at the care center, fate again stepped in. He became the overseeing director of three Head Start programs at Crow Agency, Pryor, and Lodge Grass. He says, “I knew there was a lot of turnover at Head Start on the reservations. One of my goals was to get back into education and help others.”

While Les and his wife, Leslie, and four grown children, live in Billings, his week includes traveling to the three Head Start locations and overseeing its operations, meeting with its teachers, students, and administrators.

Les’ journey has taken him full circle. His vision quest seems to be fulfilled as he is surrounded by young children and students–teaching and helping them grow—and has had the honor of helping and respecting his tribal elders.

Les’ friendship with Bill Simmons continues to this day. Simmons says that they became friends early and that over 25 years, Les learned every position at MasterLube. “We celebrated the birth of his kids and my grandkids, grieved the loss of his father and both our mothers, and I watched him walk across the stage at Rocky to receive his degree.” Over the years they have had many breakfasts and lunches at JB’s on Grand Ave. Of those times, Simmons says, “When we talked about our differing views, he stretched me. He told me about his vision quest where he was sitting cross-legged on the ground surrounded by young Crow kids, so it is not a surprise that today he is running the Head Start programs there.”

Simmons says that Les will occasionally call him and suggest meeting for breakfast. Simmons says, “I always say yes.”

“Don’t be afraid to take chances. Be prepared for whatever adventure you want to try next.”